Today we start a new series on improving videos. This installment covers the first steps in converting an inexpensive clamp-on work light to use instead of a pricey professional floodlight. In Part 1, we start with the mounting bracket for the light.

Gorilla Glue is great stuff! It will permanently bond a wide variety of materials easily, is sandable, paintable and totally waterproof. But a little of this glue goes a long way, and too much goes CRAZY!

Going with the idea that "more is better" is an easy mistake to make. So today, I'll show you what making that mistake looks like. That way, you can learn without having to make this messy error yourself.

Gorilla Glue is a polyurethane adhesive, basically the same chemical as those expanding foams that you can use to seal and insulate gaps in your home. It has a long work time, about 10-15 minutes. "Work time" is the time you have to make adjustments in the positioning of the pieces to be glued before it starts to set up. With some glues, repositioning after the work time isn't possible, while other glues can be repositioned after their work time has passed at the expense of the integrity of the bond.

Like its cousin, that expanding foam, Gorilla Glue foams up and expands as it sets. Because of that, you need to clamp the pieces being bonded. Without clamping, the expansion would force the pieces apart, which weakens the bond and messes up whatever positioning you set up during the work time.

One of the things about polyurethane adhesives is that they bond VERY WELL TO ALMOST ANYTHING. Wood, cloth, fingers... That's why that expanding foam usually comes with little disposable gloves. On the Gorilla Glue web site's FAQ, there is a question about cleanup. The answer says, "Cured glue can be removed with a chisel, scraper or sandpaper." Ouch. So, if this stuff gets on your skin, you'll just have to get used to wearing it until the skin cells underneath peel off.

Another oddity of working with a polyurethane adhesive is that you should slightly dampen the surfaces with water before applying the glue. That's because moisture activates the curing process in the glue. 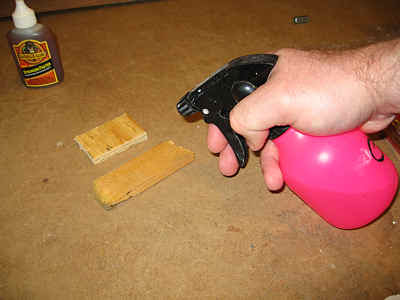 So, here's the two test pieces that we'll use for our demonstration. These are just two little scraps of wood that were laying around. Here, I'm using a small spray bottle to mist a little water onto the pieces. 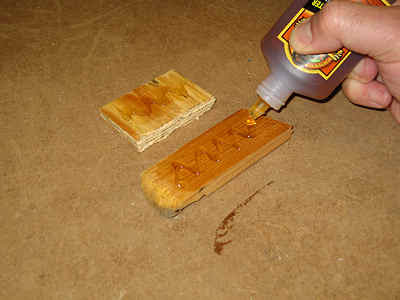 This photo shows a liberal application of the glue on each surface. The instructions say to "spread a thin layer". This is obviously too much. 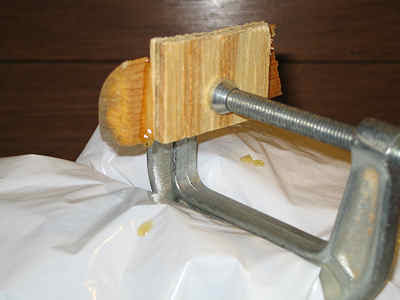 Here, I've lightly clamped the two pieces. I haven't really applied that much force to the pieces, but you can already see the "oops factor" oozing out from the joint. 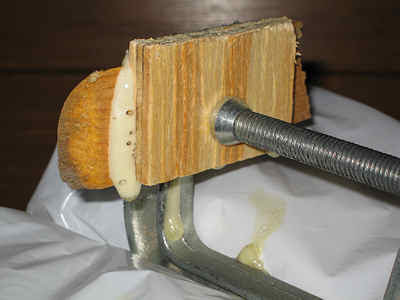 Here, at the 30 minute mark, we are seeing the expansion at work. Remember, that stuff is almost impossible to get off, which is why I have a bit of plastic bag protecting my bench vise under there. 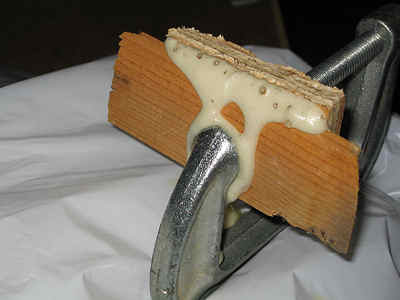 If you thought it looked bad from the front, just look at what's going on in back! 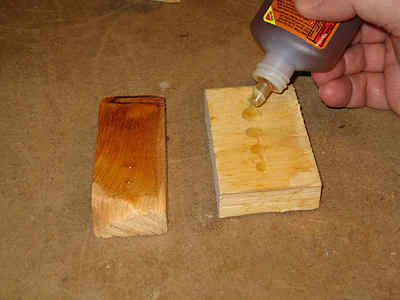 Here you see that I am applying just a few drops of glue to each piece. 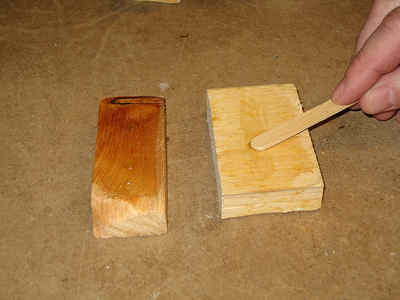 Next I spread the glue evenly over the surface. I'm using a popsicle stick (mmmm... this one was orange...), but you can use any disposable item, like a coffee stirrer. 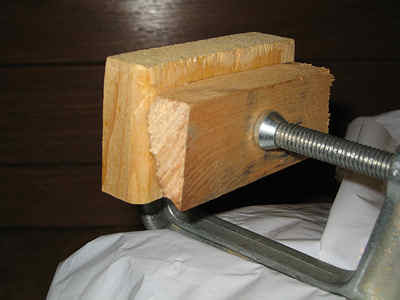 Back in the clamp again, notice that there is no ominous ooze this time to foretell doom. 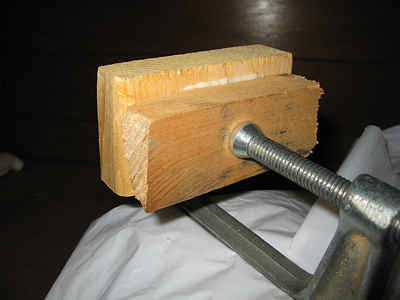 An hour later, and only minimal excess has expanded from the joint. OK, maybe I could have only put it on one side. Now we both know. 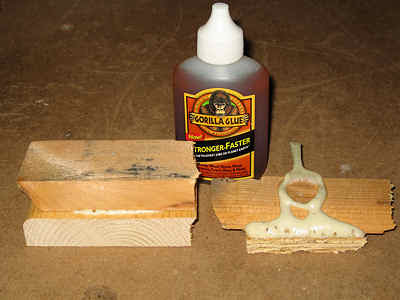 So, the choice is yours: neat glue job or horrendous mess. It just goes to show that having the right materials for the job isn't enough. You gotta have that little bit of extra know-how: The WrightStuff.
Posted by Richard at 12:58 PM 1 comment:

The WrightStuff now has its own custom domain name! You can reach this site using:

For those of you that have already bookmarked greysteele.blogspot.com, not to worry - That address will still work. By the way, I'm busy working on two new videos (Repointing Brick Mortar and DIY Cheap Video Lighting), plus a Text'n'Pics article on some common adhesives. Stay tuned for more tips on how you can have... (wait for it)... The WrightStuff!
Posted by Richard at 11:02 AM No comments: