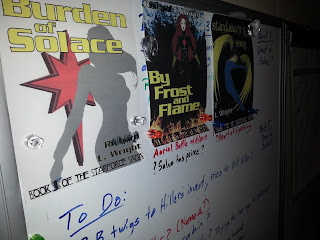 What a difference a year (+) makes.

Long Version:
The summer of '14 was a magical time. I met Dorothy while vacationing on Nantucket. Her husband was off fighting the war and I fell madly in... Wait. No, that was Summer of '42.

My summer tale was a bit less romantic, but definitely a "coming of age" story for me. I was writing my second novel, Invulnerable, and it was proceeding well. I had a solid 40,000 words down, the story of how Nate Gorman became the titan called Goldstar. It was on-track for completion around Christmas, a solid introduction to The Starforce Saga series. Life was good.

Then I went to DragonCon 2014, focusing almost all of my time there on the Writers' Track programming. And lo, the scales did falleth from mine eyes. All it took was one comment by an established author: "What keeps a reader hungry for more books in a series is that they fell in love with your hero from the very start."

Imagine a thought balloon over my slack-jawed face: "Crap. Invulnerable is about Nate. The real hero of the series is Cassie. Even though she plays a role in his story, it is his story. I'm writing the wrong book. I'M WRITING THE WRONG DAMN BOOK!"

So on Labor Day 2014 I came home from the con, put away the story board for Invulnerable, and pulled out a new one. It was time to start plotting a new book, a book about Cassie. I started laying down the bits and pieces of a book I called Healer's Oath.

Six months later I had my 1st draft. It was a weird half-year that included a week writing by the ocean in western Costa Rica. I wrote a killer love scene while sipping wine and watching sunsets over the Pacific. It wasn't until I got home that realized that scene needed to be ripped out. In my euphoria I had let Cassie enjoy some of my good mood, when what she really needed was a beat-down. You can't rise like a phoenix until you've been through the fire. Sorry, Cass. I promise to make it up to you in Book 2.

Two more months and I had a reasonably polished 2nd draft and started a cycle of critiques and beta readers. Healer's Oath stole the title from my first Cassie Whelan novel and now goes by Burden of Solace. She's been through three more rounds of rewrites and edits, and grows stronger every day. I also changed to attending a different writing group, but that's a tale for another day.

As of this writing, I have two agents interested in the book in it's current form, plus an editor at a major publisher who wants to read it if I can put an urban fantasy slant on it. (Brain = Exploded. In a good way.)

Meanwhile, I've got a good start on another, unrelated scifi tome - RetroSpec. I'm sure I'll have more to say about that in later posts.

So, that's the long version of the gap in my posts. I know I said I'll do better about posting regular content and I will. I also promise to make things a little less personal and more informative here. I've learned a lot in the past year and I am dying to share it with y'all. Stay tuned. 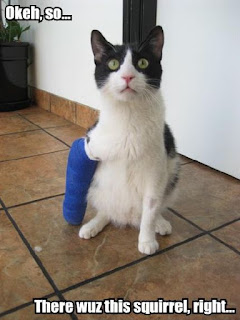 Posts like this are de rigueur, so rather than subjecting y'all to a long explanation excuse, I'll keep it short and sweet.

I effed up and didn't post. My bad. I'll do better in the future.