Today I'm taking time out from my usual posts to give y'all a look at a typical day for me. You see, I'm the family handyman. Not just for my own little familial unit, but also for my extended family - parents, in-laws, etc. When something's broken, or needs to be installed - I'm their go-to guy.

My mother-in-law has a nice little house on a lake down in middle Georgia, complete with a covered dock and boathouse. The dock holds her pontoon boat, and has a boat lift. Well, about three weeks ago during a big storm, one of the cables snapped and dropped the boat. No serious damage, but since then the boat has been taking some abuse from the wind and waves. My mother-in-law called her usual dock/boat maintenance guy, who promised to get to it as soon as possible. Fast-forward three weeks. My wife and I are visiting and point out that there's still no progress on repairing the boat lift. After we head back to Atlanta, Mom-in-law calls and it turns out that her maintenance guy got busy and just forgot. While she has him on the phone, she asks how much he thinks this will cost. He estimates around $400. And this is the part where my mouth starts writing checks that my body has to make good... "$400! It can't possibly cost that much. I know I can do it for less."

Have I ever repaired a boat lift? Well, no. But, you know, it's just a mechanical doololly. How hard can it be? Yeah, that's my stupid mouth again...

So, I run down to the hardware store and pick up 150 feet (guesstimating) of 1/4 inch (again, guesstimating) galvanized steel cable for $60. Sweet. We're saving 85% of the cost. I then pack up my tools, a folding ladder and some odds & ends and off I go for a two-hour drive to the lake.

The first thing I discover is that I've bought the wrong diameter cable - The old cable is 5/16" instead of 1/4". I also bought too much - 100 feet is all I need. So, I'm off to town (a 20 minute drive each way, BTW) to buy some 5/16" cable... Lowes doesn't have any. They have accessories and parts for 5/16" cable, but no cable. The salesperson suggests a new place down the road - Tractor Supply Co. Sure enough, they have 5/16" cable, but it is .99 a foot. I know I could have gotten it cheaper in Atlanta, but that was then and this is now. Still, we're saving 75% off the alternative. Cable bought and back to the lake.

Now, about the repair itself...

The boat lift itself consists of a motor which turns a drum (a long steel pipe, actually), and four cables that wrap around the drum as it turns. Each cable then passes through a pulley and attaches to eye bolts at the ends of two steel I-beams, on which the boat rests. As the drum turns, the I-Beams come up under the boat and lift it out of the water. Simple. 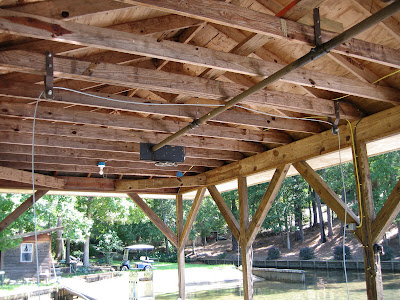 As I said, the problem with this lift was that one of the cables (aft starboard side) had snapped. As this picture shows, it parted at the point where it attaches to the eye bolt on the I-beam. 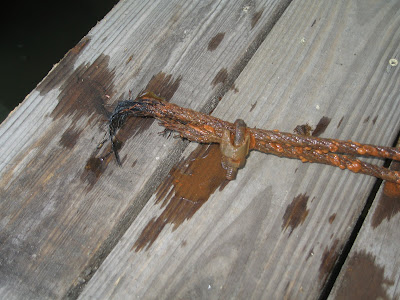 Since all of the cables are the same age, I decide right off to replace all of them. The drum, beams and eye bolts all appear to be in good condition, so I won't bother with them.

Here we see that the cable passes through the pipe/drum, which means that there are actually only two cables, not four as I originally thought. That is good, since it means less cable cutting, and attachment to the drum is super easy. 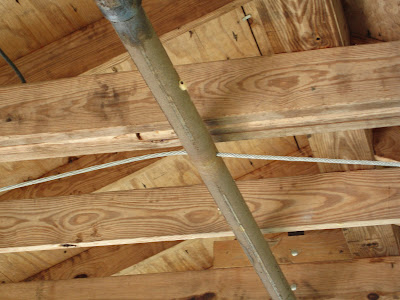 I cut the old cables, careful not to lose the ends into the lake so that I could pull up the I-beams. At this point, the I-beams are resting on the bottom and I'd really rather not have to get wet to fetch them. I removed the old cables and thread the new cables through the pulleys and the drum. I had originally though that it would be easier to climb up in the rafters of the boathouse and work from above. However, that plan had one major flaw - it made my wife and her mom extremely nervous. Fortunately, it was a beautiful calm day, so I was able to set up a folding ladder on the pontoon boat and work from below. I wouldn't have been able to do that it either the wind was blowing or there were more boats around making waves.

Now it was time to work on the I-beams. For starters, these things are great heavy beasts weighing 200 pounds each, possibly more. Did I mention that I'm doing all of this solo? Yeah. Heavy. I started to pull up the beam near the bow and the starboard cable snapped, exactly the same way that the aft cable on the same side had. Good thing I decided to replace all of the cables, huh? Luckily, the port side cable was in good enough shape to get the beam out of the water and onto the dock. Likewise for the aft beam. Whew. Time for a break to catch my breath. Feel free to examine the surviving cable (port side) on the bow beam while I rest up... 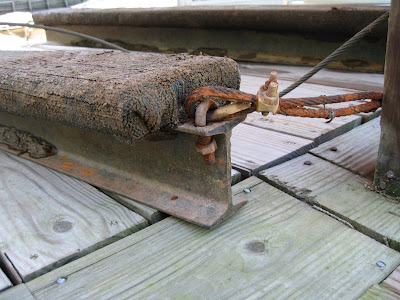 Okie doke. I'm much better after my rest. I also moved the pontoon boat out of the slip for the next steps. I cut away the old cables and thimbles from the beams. The thimble is that curved metal shield that goes between the cable and the eye bolt. It creates a less stressful curve around the eye and keeps the eye bolt from rubbing against the cable itself. Since the bow beam and cables are close to the dock, I was able to attach both cable ends to that beam and toss it back in the drink. Made an impressive splash, I'll tell you!

Rigging the aft beam was a little trickier. I attached one end of the new cable, and used a piece of old cable as a temporary attachment on the other end. Then that one went into the water as well. Next, I just ran the lift to raise both beams. Of course, the aft beam only came up on one side (port), so I manually lifted the starboard side and swung it over to rest on the side of the dock. From there I was able to attach the other end of the new cable securely. I slid the beam back off the dock and ran the lift back down so both beams rested on the bottom again.

Next, I tweaked the amount of cable on each side of the drum to level the beams side-to-side. All I had to do was lower the beams until the cables were completely payed out. Then I could pull on the cable, sliding it through the hole on the pipe/drum until each beam was level when the beams were raised. How did I know they were level? Simple: The water level served as my guide. I just raised the beams until they just broke the surface and then noted which end needed to be raised, and by how much. Because I was shifting the center of the cable through the drum, I had to divide the adjustment by two. That's because for every inch I raised one end, the opposite end lowered by the same amount.

I was luck in that the bow and aft cables were already level front-to-back. I guess that is because I was careful to cut each cable to the same length. If that hadn't been the case, then I would have had to make adjustments to the lengths of the cables themselves. As I said, I was lucky.

Anyway, here's the pontoon boat safely back up on it's lift, ready to be covered and stored for the winter. 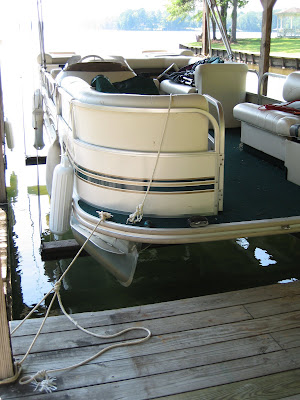 So, now you have a taste of what my life is like. Challenging, but rewarding. The truth is, I can't imagine having the ability - skills, talent, know-how, whatever - to help other people and not using them whenever the need arises. What's the fun in that? My mother-in-law is extremely happy and grateful and my wife is treating me like a returning conqueror. Life is good, and that's definitely...

The WrightStuff.
Posted by Richard at 9:26 AM