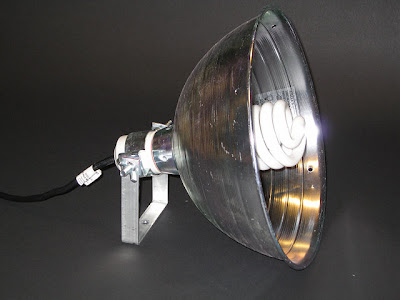 In a previous video tutorial, I went to the trouble of making a U-bracket to replace the spring clamp on our el cheapo video lights.

In this segment, we’ll construct an inexpensive stand for those lights, getting maximum benefit from that U-bracket. To make our stand, we’ll use inexpensive plastic plumbing pipes and fittings. So, let’s get going.

Plastic plumbing parts are some of the most versatile materials in our handyman arsenal. They’re cheap, readily available, and easy to work with. They come in a variety of sizes and even a few variations in thickness and exact type of plastic.

The type of material we’ll be using is called PVC, which stands for Poly Vinyl Chloride. PVC is white in color. Don’t confuse PVC with Chlorinated PolyVinyl Chloride, which is referred to as CPVC. CPVC is used in situation where higher temperature water is being transported, like hot water lines on your house. CPVC is slightly yellow compared to PVC, so it’s easy to tell them apart.

There are also two types of PVC plumbing materials. We’ll be using what is called "Schedule 40" PVC, and it is engineered to handle higher pressures. The other common type of PVC is called "DWV" for Drain-Waste-Vent, and they have thinner walls since they don’t carry water under pressure.

But, enough about PVC. I only mention these varieties so that you won’t pick up the wrong materials by mistake. We’ll be using Schedule 40 PVC for this project.

Our light stand will consist of an H-shaped base, the base riser, and an adjustable upper section, which will let us position our light wherever we need it.

The base and riser will be made from 1" pipe. We’ll use ½" pipe for the upper section. Consult the list of materials below for a complete shopping list.

The base is pretty simple. We have four short sections of pipe, about 1½ to 2 feet in length, with a cross-tee in the center. A regular tee in one leg provides a place to insert the riser. Each leg ends in a cap. While it might seem that the end caps are optional, in fact they are needed to keep the base from wobbling. 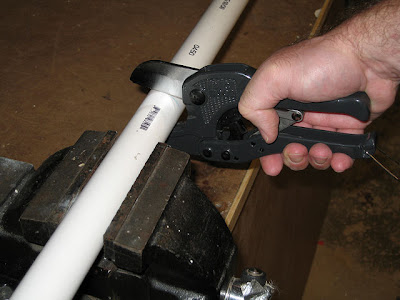 We cut our 1” pipes to length using either a saw, or a special PVC pipe cutter like this one. If you are doing a lot of work with PVC pipe, these cutters save a lot of time and effort. One leg of the base will be cut about 2-3 inches from the end for the tee that accepts the riser. 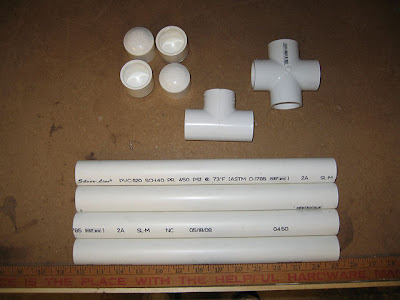 One option to consider is weighting the base section with something heavy to add to the stability of the stand. One option is filling the base with sand. That’s easy enough, but if you need to transport your stand and lay it on its side, the sand could spill. Another option is to insert lengths of cast iron pipe inside the legs. I’m going to leave the caps unglued so that I can do this later. A third possibility is to simply place sandbags or some other weight on top of the legs. Sandbags are favored by professional photographers who shoot on location because they can be filled with materials found on site, reducing the weight they have to transport. You might want to experiment to see what works best for you. 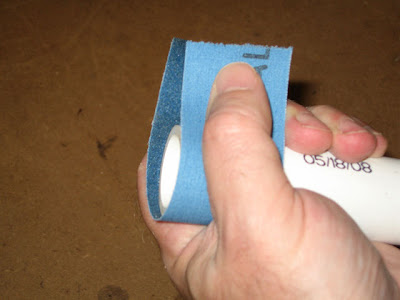 We prepare the three legs and the short section of the fourth leg for gluing by lightly sanding the outside of both ends, about an inch and a half. I’m using emery cloth, which you can find in the plumbing section of your local home improvement center. Regular medium grit sandpaper works fine too. Like the PVC pipe cutter, emery cloth is handy if you’re doing a lot of plumbing work. We also sand the insides of our fittings. The sanding roughens up the plastic and allows the glue to get a better bite into it.

Dry fit all of your parts before gluing. The only part that requires careful alignment is that regular Tee that takes the riser. If it’s crooked, your stand will lean, so take a minute to line that up right and then mark the parts so you can quickly position the pieces during gluing.

Now, a word about using PVC cement. It stinks. You don’t want to get it on your skin or especially not in your eyes. And it’s not healthy to breathe those fumes, so you’ll need to either do this outdoors, or have good ventilation if you work indoors. These fumes can actually make you pretty dizzy if you get too much exposure.

As fun as that may initially sound, this stuff can render you unconscious and even kill you. Even moderate doses have been linked to cancer, so play it safe and ventilate. Oh, as if that wasn’t enough, it’s highly flammable, so don’t use it near an open flame like the pilot light on a hot water heater. (Why do they call it a hot water heater? If the water is already hot, why do you need to heat it?)

Oh, and normally I’d be using a PVC primer before applying the glue, but since these pipes won’t be holding any water, I’ll skip that step. 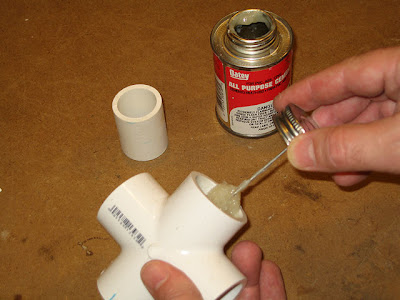 I’ll start with that one connection where alignment is important and then work my way out from there. First, I’ll glue the short section (called a nipple, in plumbing lingo) into the cross tee. I use the little brush that is built in to the cap to smear a little glue inside the fitting, and then a little more on the end of the pipe. Don’t use too much or you’ll make a mess. 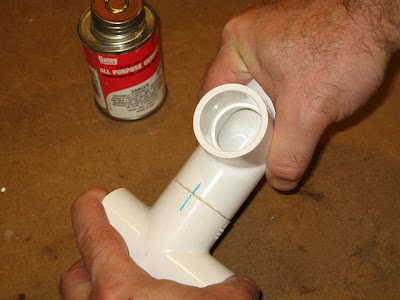 Now, we just push the two parts together, and then give them a little twist, no more than a quarter of a turn. That distributes the glue evenly and assures a good, solid joint. Hold the parts together for a few second so that it can begin to set.

A couple of tips about gluing: Keep the brush in the can between uses. Work quickly so the glue doesn’t start drying on you. Make sure you push the pipe all the way into the fitting so that it bottoms out.

Once the glue has firmed up, usually within a minute, you can move on to the next joint. This is the one where the alignment counts, so plan ahead for that little twist by initially inserting slightly off and then twisting into the align marks. Again, hold the parts while the glue sets enough that things don’t move.

Repeat with the rest of the leg sections. 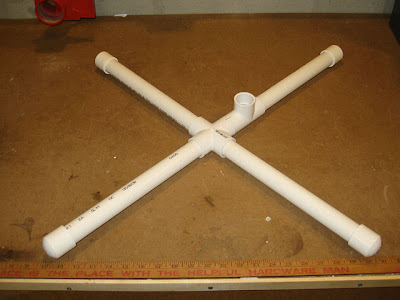 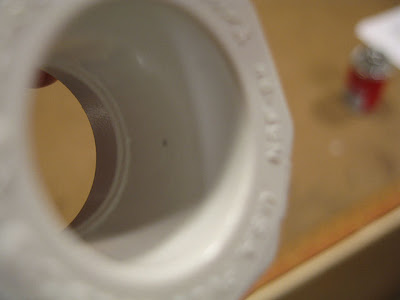 At the point where the ½” extension meets the 1” riser, we have a 1” x ½” bushing to make that transition in diameter. But this bushing is designed to mate two parts together permanently and firmly. There’s a lip to keep the smaller pipe from going too far, and the fit is quite tight.

However, we want our ½” pipe to slip all the way inside the larger riser pipe, past the stop. Plus, we need a looser fit or else we’ll have a fight on our hands to adjust the height of the stand. This part will just need a bit of surgery to work smoothly. 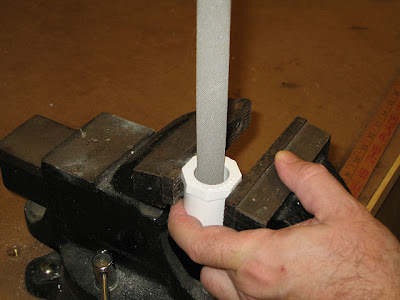 To adapt this part to our purpose, we just need to file out some of the inside. That will get rid of that lip and create some more room for the ½” pipe to move more freely. I’m using a round or “rat tail” file to do this. A small half-round file would also work, but finding one to fit might be problematic.

I start by removing the stop lip. Then I remove just a little bit of material evenly all the way around. Test fit a piece of ½” pipe from time to time to see when you can stop. The pipe should slide easily but not wobble about. Once you have it right, lightly sand to smooth the surface.

Now that our bushing has recovered from surgery, we’re ready to assemble the riser. Strictly speaking, none of these joints require gluing. A friction fit will work just fine, plus you can disassemble the stand for easier transport.

Now we’re ready for our final piece - the extension. The only halfway trick part here is that we need to add a screw base to attach to the light bracket. You do remember the light bracket, right? 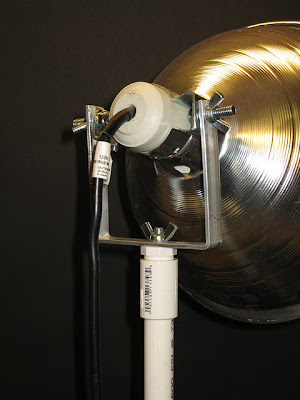 For that we’ll just drill a ¼” hole in the middle of this ½” PVC plug. Once that’s done, just insert a ¾ inch ¼-20 hex head bolt from the inside. Depending on the plug, you may have to do a little filing to fit the bolt head fully into the plug. Secure the bolt with a little Gorilla glue or epoxy.

After the glue is cured, insert the plug into the ½” coupler and add the coupler to the end of the ½” pipe. Last but not least, place the #8 hose clamp around the ½” pipe, but don’t tighten it too much - Just enough so that it doesn’t slide easily. Now insert the completed extension into the bushing hold on the stand and we’re done.