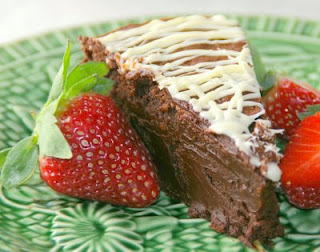 Today we're going to do some different "wrighting" - We'll turn our attention to the manly art of cooking.

In this case, we're going to whip up a flourless chocolate cake for Valentine's Day. Nothing melts a woman's heart like her man actually preparing a meal for her. For most of us guys, real cooking is outside our comfort zone. Sure, we'll grill a steak or some burgers. That's not cooking, its more like conquering fire and, besides, it occurs outdoors. One comedienne once quipped that men only do chores if there is danger involved, which is why she had to tell her husband that the trash was ticking to get him to take it out. That's Man's Work. But baking? That's sissy stuff.

Au contraire, mes ami! A real man knows that cooking food is just as virile as hunting it down and killing it. But, more importantly, chicks love it when we cook! And what better time to surprise her with a act of culinary affection than Valentine's Day. Add the magical effect that chocolate has on the female heart and this could be a very special memory for both of you.

So, let's start with the recipe. The recipe I settled on comes from Katia, aka Gourmet Girl. Be sure to check out her blog for tips, recipes and other excellent culinary resource. This particular recipe has the advantage of having a relatively short ingredient list, plus it uses brandy. Chocolate and liquor - what's not to like? I did make one alteration to Katia's instructions. I'm diabetic, so I replaced the sugar with granular Splenda. It's a one-to-one substitution measurement-wise, so this is a simple change.


I start by preparing the 9" springform pan that will be used to bake our cake. First, I cut out the parchment paper that will be used to line the bottom of the pan. Just open up the springform pan and remove the bottom plate. Place the pan bottom on the parchment paper and trace the outline with a pencil. Using scissors, cut slightly inside of the pencil line, about 1/8", and discard the rest. 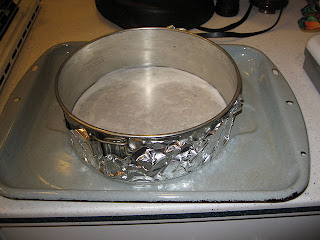 Now we will grease the pan to make sure our cake doesn't stick to the pan and make a mess when we try to remove it. Simply take a stick of butter (a short stub works great) and rub the surfaces of the pan, both sides and bottom, lightly coating the inner surfaces with the butter. I found that it was easier to do this with the pan bottom removed. Reassemble the pan, place the parchment paper circle in the bottom and rub butter on the top surface of the paper. Finally, turn the pan over and cover it with aluminum foil. When we bake the cake, it will be sitting in a pan of water and the foil will keep the water from seeping into our cake. The recipe calls for the water to come about halfway up the side of the pan and I found that regular 12" wide foil doesn't quite cover the pan high enough. My solution was to use two layers of foil at right angles to each other and luckily the water didn't penetrate. You might not be as fortunate so I recommend getting some wide foil.

Now comes the fun part - melting the chocolate and butter. Katia didn't specify what kind of butter, but I used unsalted. She does recommend using a good quality dark or semi-sweet chocolate, so I opted for the Giradelli Semi-sweet morsels instead of the standard Nestle's. 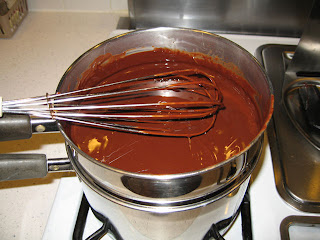 To melt the chocolate and butter without scorching, Katia uses a bain marie, which is a fancy term for one pan immersed in a larger pan of water. The water serves as a heat buffer and assures that the maximum temperature doesn't exceed the boiling point of the water. I used a double boiler, which is similar except that the smaller pan nests snugly into the larger pan and the water doesn't actually touch the inner pan. Instead of being immersed in the water, steam heats the inner pan. Results are similar, but not exactly the same since the metal of the two pans are in contact along the edges. As long as we keep a close eye on the chocolate mixture and stir often the double boiler will work well enough for our purposes. I used a spatula in the beginning to keep the stuff on the sides moving, then switched to a whisk as the melting proceeded for a smooth finish.

While the chocolate is melting (keep an eye on it!), I prepare the egg and Splenda mixture. I decided to drag out my wife's mixing stand so that I wouldn't have to hand-hold the mixer for the 10 minutes it would take to whip it (We are Devo, Whip it good!). I doubt that I would have been able to keep the chocolate mixture stirred if I had to concentrate on a hand mixer. If you don't have a stand mixer, I suggest waiting until after the chocolate is off the heat to whip the eggs. Here's what the eggs look like at the start, at the halfway point and when completely whipped.

This is a good time to start the oven pre-heating to 350 degrees. 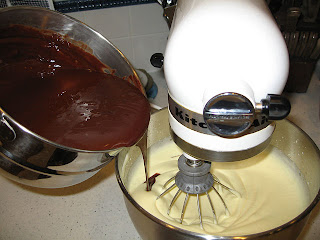 Now we slowly add the chocolate mixture to the eggs and Splenda. It is important that this be done gradually and at a low speed. Take your time and go slow. 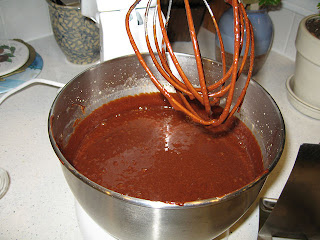 Once you have the chocolate completely incorporated into the eggs, add the vanilla and brandy. Here's the finished cake batter. Yum. 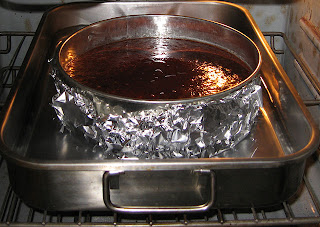 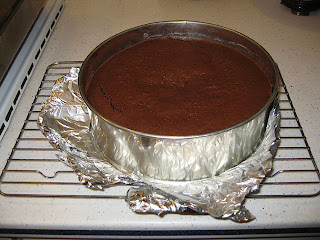 When baking is complete, carefully remove the roasting pan from the oven and then remove the springform pan to a wire rack for cooling.

Once the cake has cooled, you can remove it from the springform pan. I left the bottom of the pan on for stability until I transferred it to a cake plate. The paper I left on because it was difficult to remove without destroying the cake and it didn't seem to be a problem as I sliced it later. 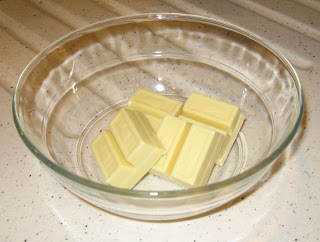 Now we get fancy - time for the drizzle. This is the part of Katia's recipe that transforms the cake into an impressive visual. And it is simple as pie. Cake. Whatever. Just take a few blocks of white baking chocolate and place them into a microwave-safe bowl and nuke them for a couple of minutes. Stir and nuke for one additional minute at a time until the chocolate is completely melted. I found that the 4 ounces Katia called for was a bit more than I needed, so I will cut it down to 3 ounces in the future. 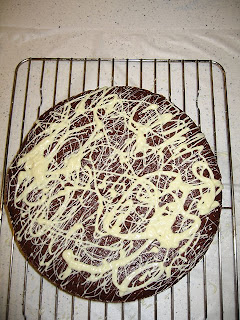 The drizzling itself is fun and easy. Just spoon up some chocolate, and let it drip from the spoon as you move it abut over the cake. Moving the spoon faster will make thinner lines, slower will give you thicker lines. If the chocolate gets a bit thick, then just nuke it again for a few seconds. Here's my work of abstract edible art. Yours will look completely different, which is just fine.

Immediately before serving, I made some whipped cream to serve with the cake. Its a good idea to put your mixing bowl and beaters in the fridge or freezer for a bit before you start. I whipped 1 cup of heavy whipping cream until it just starts to form stiff peaks. Then I removed it from the mixer and folded in a teaspoon of vanilla extract and 3 tablespoons of granular Splenda. Good stuff. Try not to eat it all straight out of the bowl...

Serve up the chocolate cake with a dollop of whipped cream and a couple of juicy strawberries. You lady will love it and she'll love you for taking the time and effort to do something special for her.
Posted by Richard at 10:18 AM